LEARN MORE ABOUT OUR EXECUTIVE MEMBERS 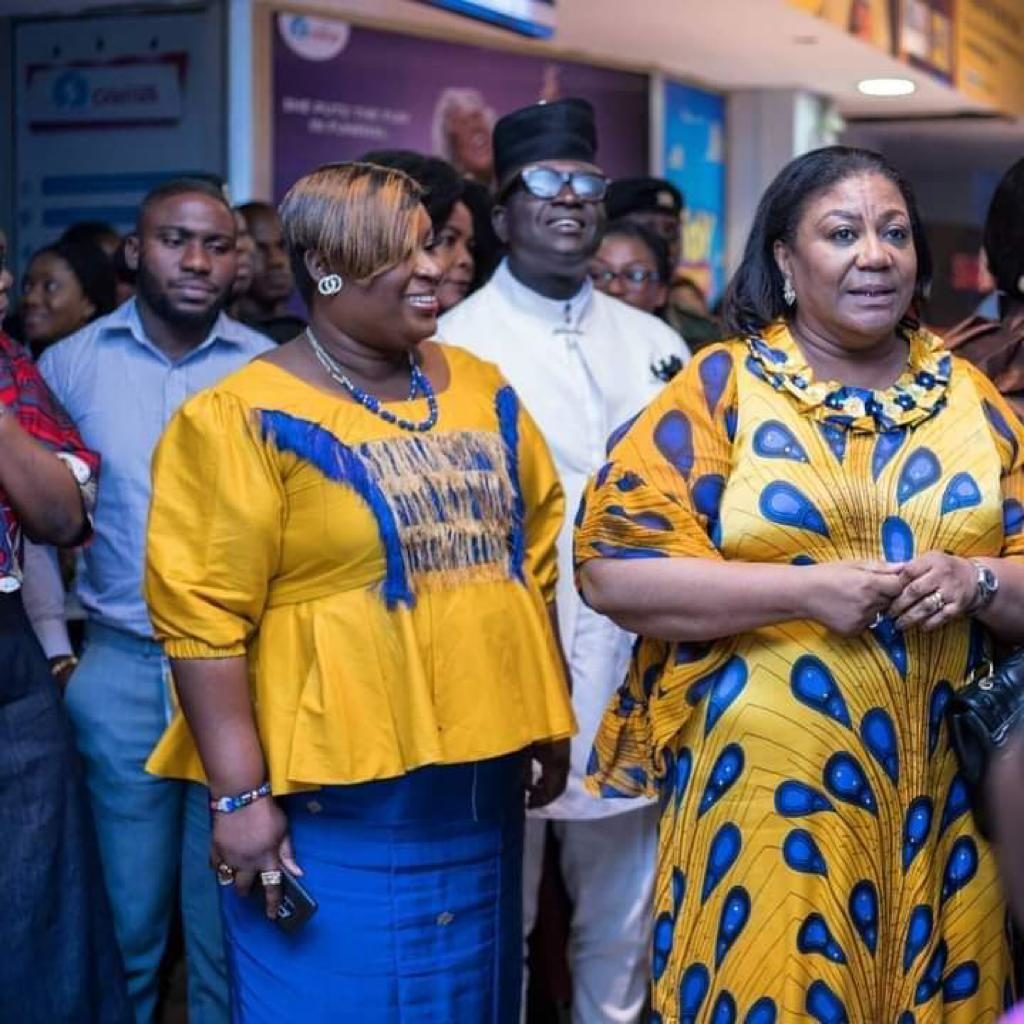 To rehabilitate people living with Mental Health conditions in Ghana through advocacy, skills training, as well as helping them access Free Basic Education and Health Care.

An outline of the proposed project, and how it fits into the wider strategic plan 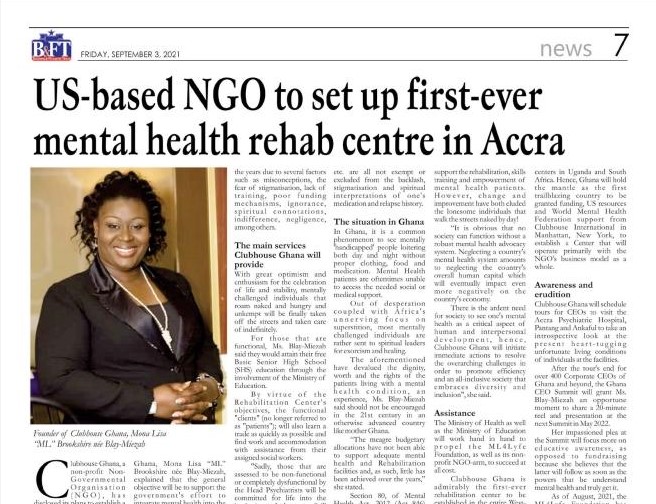 The center, when completed next year, will open its doors to former patients / clients; and provide them with skills in carpentry, farming, cooking, bartending, masonry, plumbing, as well as other trades (if necessary); in order for them to be self-sufficient when they recover from a mental condition in any local psychiatric hospital.

Through these activities, the recovering individuals will gain an inner sense of self-pride, resilience and tenacity to function and also have the capacity to face life’s challenges devoid of family and community neglect due to the stigma attached to mental health and the shrouded influence in its wake!

Clubhouse Ghana is admirably the First-Ever Clubhouse-Franchised Rehabilitation Center to be established in the entire West-African region. There are only two other Clubhouse-Franchised Rehabilitation Centers in Uganda and South Africa. Hence, Ghana will hold the mantle as the first trailblazing country to be granted funding, US resources and World Federation of Mental Health support from Clubhouse International in Manhattan, New York etc. to establish a Center that will operate primarily with the NGO’s business model as a whole

Mental Health is indeed critical, because it impacts the thoughts, behaviors and emotions of individuals; and as such, has a direct impact on one’s actions and inactions as well as one’s sense of judgment and self-worth. Additionally, mental health has socio-economic implications for the patients, their families and the nation as a whole since it contributes significantly to productivity and the human resource base of any country in Africa or the world at large.

According to the World Health Organization (WHO), about 13 percent of Ghanaians are ‘mentally challenged’. However, the issue has not really been given the needed attention over the years due to several factors such as misconceptions, the fear of stigmatization, lack of training, poor funding mechanisms, ignorance, spiritual connotations, indifference, negligence, among others.

In Ghana, it is a common phenomenon to see mentally ‘handicapped’ people loitering both day and night without proper clothing, food and medication. Mental Health patients are oftentimes unable to access the needed social or medical support. Out of desperation coupled with Africa’s unnerving focus on superstition, most mentally challenged individuals are rather sent to spiritual leaders for exorcism and healing which should not be encouraged in the 21st century in an otherwise potentially advanced country like Ghana.

“The meagre budgetary allocations have not been able to support adequate Mental Health and Rehabilitation facilities and, as such, little has been achieved over the years,” Section 80, of Mental Health Act, 2012 (Act 846) talks about the establishment of a Mental Health Fund which will, among other things, support the rehabilitation, skills training and empowerment of Mental Health patients. However, change and improvement have both eluded the lonesome individuals that walk the streets naked by day!

There is the ardent need for society to see one’s mental health as a critical aspect of human and interpersonal development, hence, Clubhouse Ghana will initiate immediate actions to resolve the overarching challenges in order to promote efficiency and an all-inclusive society that embraces diversity and inclusion”. 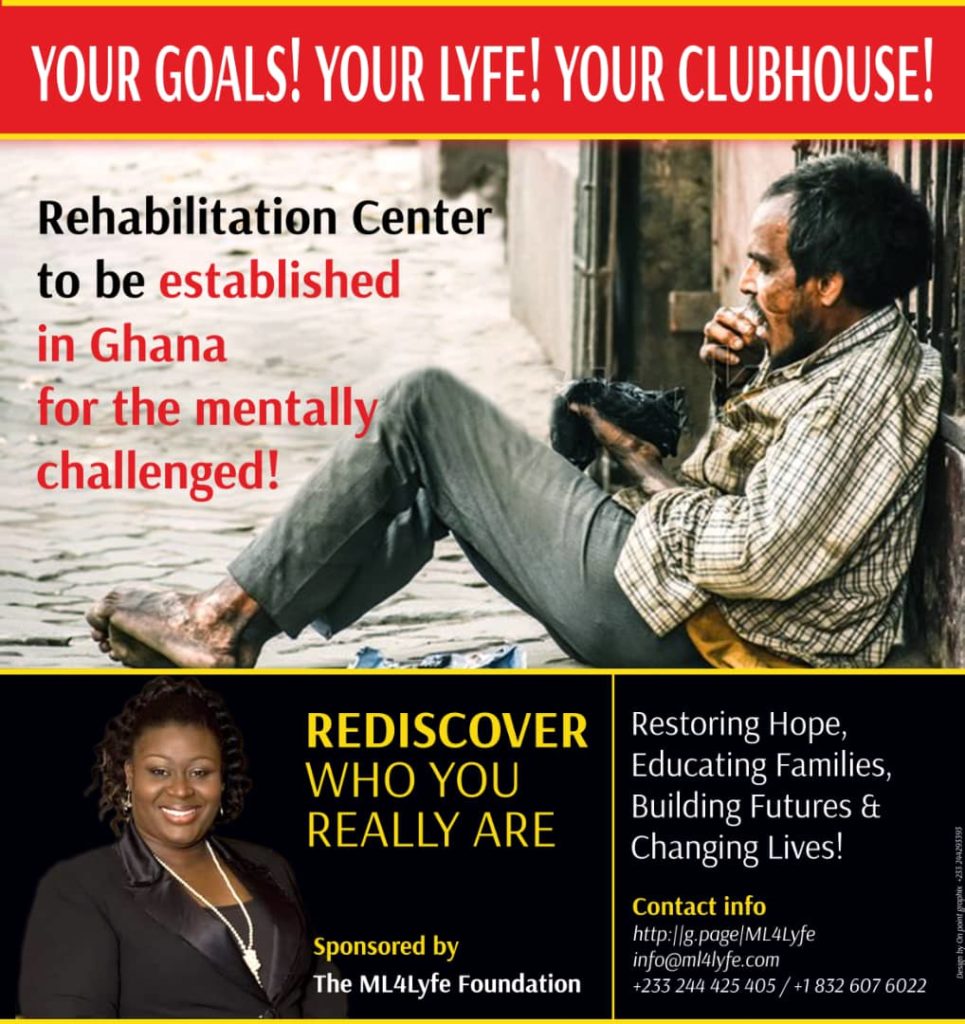 Access to proper medical care for Mental Health patients has been a challenge and the inadequate budgetary allocation by the central governments over the years seem not to change in the near future, due to Ghana’s weak economic status. There are only three dedicated Mental Health hospitals in the country which are serving over 30.8 million people. According to Ghana’s Mental Health Authority report, only 2 percent of the Mental Health patients are able to access medical care. The cost of treatment is also a major barrier for individuals to access medication and treatment.  Again, the mental health patients do not have adequate social support system that augment their medication to facilitate their recovery and integration. As such, a lot of the mental health patients do not go for treatment, whilst others discontinue or default in medical care.

The proposed project intends to facilitate the rehabilitation process of mentally challenged individuals that are unkempt and neglected without shelter by taking them off the streets in order to ensure reintegration and restoration of their rights and human dignity through the provision of the following services:

The Ministry of Health, Rotary Club of Accra Industrial (RCAI); as well as the Ministry of Education will work hand in hand to propel ML4Lyfe Group’s non-profit NGO-arm, to succeed at all cost.

The project when implemented will go a long way to benefit the people of Ghana in particular and the world as a whole in the following ways by meeting some of the SDGs (http://ww.undp.org) The solution to Ghana’s current Mental Health situation is beyond the effort of individual and possibly successive governments and any attempt to continuously count on individuals will forever have adverse effects on the Ghanaian society. Clubhouse Ghana believes that a collective effort in providing the needed care is the way to finding a lasting solution. 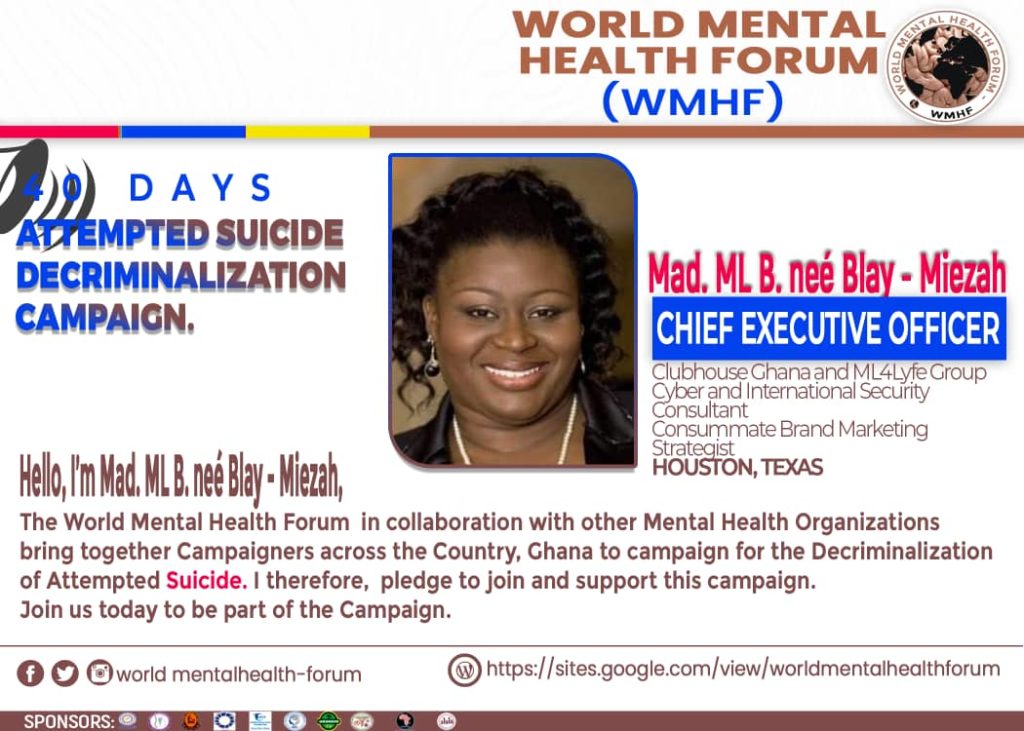 Clubhouse Ghana will schedule tours for CEOs to visit the Accra Psychiatric Hospital, Pantang and Ankaful to take an introspective look at the present heart-tugging unfortunate living conditions of individuals at the facilities.

After the tour’s end for over 400 Corporate CEOs of Ghana and beyond, the Ghana CEO Summit will grant the CEO and Founder, Madam Brookshire an opportune moment to share a 20-minute reel and presentation at the next Summit in May 2022 (even though their organization is NOT in partnership with Clubhouse Ghana or in any way affiliated). The CEO and Founder will simply be granted an opportunity to be one of many Speakers for the esteemed event. Her impassioned plea at the Summit will focus more on educative awareness as opposed to fundraising because Clubhouse Ghana believes that the latter will follow as soon as the powers that be understand Mental Health and its nuances.

Addendum: A fundraising plan, including a list of other actual/potential funders and the status of each request

1st: International Donors and Fundraising activities outside of Ghana

3rd: Ghana Corporates as it relates to Corporate Social Responsibility

4th: GoFundMe Portal to raise funds across the globe after the Foundation Launch: http://www.gofundme.com/ML4LyfeFoundation

Hence, Clubhouse Ghana is trying to secure funding and has been able to raise several thousands of dollars from the GoFundMe portal ahead of time and prior to the official Launch of the Foundation slated for Sunday, 26th December 2021 virtually on Zoom, both locally and internationally. This proposal is being submitted to your esteemed organization for the balance of the costs required for implementing the full program as detailed above.

A brief history and key achievements for Clubhouse International

Clubhouse International was established in 1994, as a global non-profit organization dedicated to creating recovery opportunities for people living with mental illness. The organization grows and sustains a robust network of Clubhouses around the world that offer a proven program model of psychosocial rehabilitation and community integration. Clubhouse International’s membership represents more than 325 Clubhouses in more than 30 countries on six continents. Each year, almost 100,000 people living with mental illness access Clubhouse services.

WHAT IS A CLUBHOUSE?

A Clubhouse is a facility that encourages and supports people living with mental illness to ensure their recovery. It’s a welcoming place where community and acceptance are the norm. With this (Clubhouse) concept, people who come to a Clubhouse are not considered as patients, or clients, rather they are members with unreliable rights who are engaged in the daily operations in the Clubhouse by taking critical decisions that promotes their well-being in order to function. Working alongside others who have a mental illness, members are encouraged to invest in and leverage their personal strengths and, over time, this aids tremendously with their recovery and overall sense of purpose, acceptance and well-being in an out-patient facility that can include housing services in the long-run through Social Welfare intervention.

Available evidence demonstrates that Accredited Clubhouses and Franchises provide communities around the world with an impactful and cost-effective solution for helping people who live with mental illness achieve their full potential and help minimize the devastating impact which mental illness has on society. The Clubhouse model is included in the National Registry of Evidence Based Programs and Practices established by the United States Substance Abuse and Services Administration. Clubhouse programs improve quality of life, promote healthy lifestyles and most importantly, enhance opportunities for recovery and increase individual empowerment, education and employment success. Clubhouse is also critical to helping members participate fully as citizens in their communities. The following achievements listed below are based on the findings of some scholars as listed below:

Additionally, in 2014 Clubhouse International was the co-recipient of the prestigious Conrad N. Hilton Humanitarian Prize, presented to nonprofit organizations judged to have made extraordinary contributions toward alleviating human suffering.

An overview of the forward strategy and key objectives

At Clubhouse International our vision is a world where people with mental illness recover and are an integral part of society.  Our daily work involves helping to establish new Clubhouses and providing our global network ongoing support through our quality improvement programs. With 25 years of experience in supporting Clubhouse development, growth and quality assurance we have learned that there are core components of our work. They are: These components are at the center of our work to support and expand an active and dynamic network of Accredited Clubhouse programs throughout the world. Additionally, we are motivated to improve our capacity to collect outcome data and measure the effectiveness of our work.  Like many social service organizations Clubhouses generally struggle with developing and reporting progress on key metrics and performance indicators. It is our intention to collect and report on selected outcome data for Clubhouses across countries and cultures to validate the effectiveness of our model and make improvements where needed. An important part of our growth initiative is to establish a culture of data collection and reporting. We are confident that by streamlining communication and improving access to information, training and technical assistance we can reach our key objectives for growth, as well as increase cost effectiveness and efficiency.

The network of Clubhouses around the world will provide: Conclusively, Clubhouse Ghana will utilize the funds that are being sourced from your organization to set up an out-patient facility that will enable recovered patients from Accra Psychiatric Hospital, Pantang, Ankaful and even private hospitals to garner skills; as well as the necessary education in order to be self-sufficient. http://www.thebftonline.com/02/09/2021/us-based-ngo-to-set-up-first-ever-mental-health-rehab-centre-in-accra/

Your support, advocacy and donation will greatly enhance the efforts that we are presently conducting to establish the First-Ever Clubhouse-Franchised Rehabilitation Center in Ghana.

Thank you very much.

An overview of the forward strategy and key objectives

To rehabilitate people living with Mental Health conditions in Ghana through advocacy, skills training, as well as helping them access Free Basic Education and Health Care.

Meet Connell Thompson on his Sax virtually on Sunday, December, 26th 2021 from 6pm to 8pm GMT or 1pm to 3pm EST

There will also be a surprise guest that will join to show support for all corporate endeavors under the ML4Lyfe Brand.

See you there or be square and join DJ Capelo and KKD as MC for the illustrious event. 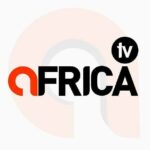